Digital factory – the future belongs to the customer

You wouldn't be the only one for whom the word “factory” conjures up images of a building with a smoking chimney. The term “digital factory”, however, has quite different associations. With its smart factory, insurance company ERGO is paving the way for the agile working of the future. 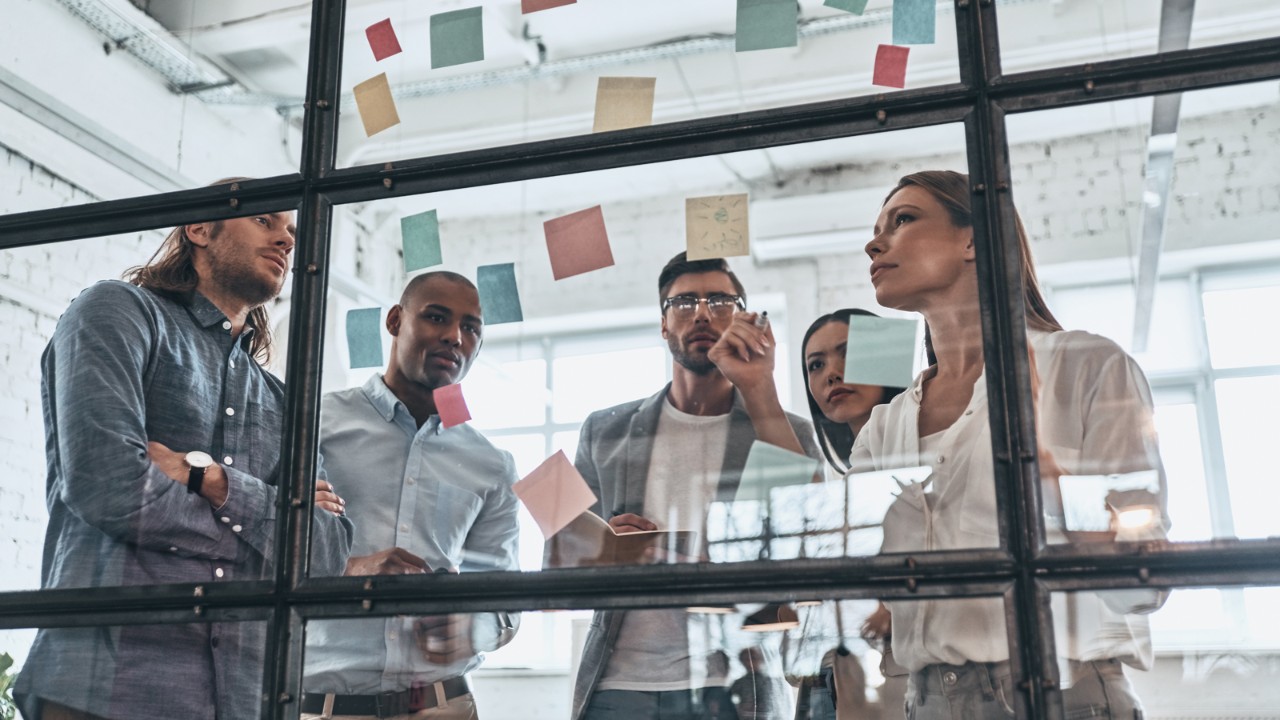 In Düsseldorf-Pempelfort – a neighbourhood with a mix of offices, culture and housing – the old and new worlds of work come together. Here you will find ERGO’s slim, high-rise tower, shooting into the sky like a silver arrow. For more than 20 years, the staff here have worked in traditional offices, checking insureds’ claims and payments, for example. They are very good at what they do and are open to what digitalisation has to offer.

The benefits of digitalisation are already being fully exploited at the digital factory. Representing a new era, the group’s smart factory stands on the other side of the River Rhine. It’s not a factory in the conventional sense – there is no heavy machinery, soot or assembly lines. Instead, the staff address the challenges of digitalisation in a creative environment, always bearing in mind what is important for customers. Whilst doing so, ERGO employees are adopting new ways of working.

Digitalisation is changing the workplace

In order to better understand the concept of a digital factory, we should first remind ourselves of the impact of digitalisation on our working lives. Robots and artificial intelligence (AI) have already found their way into offices and will continue to change companies in the future. At ERGO, for example, a software robot enters data, thus saving staff from this time-consuming and error-prone activity. And smart AI systems direct customer enquiries straight to the right case handler. In this way, emails reach the relevant contact person in no time at all, the customer receives a response much more quickly, and staff have more time to spend on things that no robot can do: personal discussions and customer consultations.

With shorter waiting times, robots taking on tedious activities, and capacity freed up as a result, the advantages of digitalisation are plain to see. That said, it is understandable that some people have concerns. “Many staff are unable to assess the scale of the use of robotics or AI systems in the future in relation to their jobs”, says Nicole Nebelung, who is pushing the process of digital transformation at ERGO and sees herself as a “bridge-builder between the old and the new worlds of work”. “That is why it is important to involve people in the process of digitalisation. We can do that in the digital factory.”

Agile working in an agile setting

ERGO’s digital factory is a large open space where you will search in vain for traditional offices. The modern furnishings stand testament to the fact that work is a process constantly in flux. Staff get together in small teams and, although their days follow a fixed structure, there is a great deal of freedom and room for creativity. “This setting is also reflected in our furniture”, says Nicole Nebelung. There are colourful square stools that can be shifted around according to requirements and the size of the team, and combined into ever-changing configurations.

Many standing desks invite you to work in a back-friendly manner, and lounge chairs offer comfortable places for pondering or recharging one’s batteries. Phone booths enable staff to make calls in private. “Importantly, the distances between colleagues are so short that it’s not worth writing an email – it’s much easier and quicker to meet in person.”

Experts refer to working in this kind of atmosphere as “agile working”. No generally accepted definition of this term has become established as yet, but what’s meant is that staff cooperate flexibly and cross-functionally across departments. Here, traditional hierarchies are abandoned in favour of team building.

“Agile working is not a method though”, Nicole Nebelung stresses. “Agile refers rather to the staff’s attitude; their mindset. And that’s what is crucial to the digital factory’s success.”

Staff who are open to new experiences at work and would like to take part in the digital factory experimental arrangement are sent to the factory’s new world of work four days a week. They will either have been recommended by their supervisor or will have had their curiosity piqued by one of the numerous events held by the group to inform staff about the digital transformation.

In the factory, staff deal with claims just like they deal with contract-related matters – the customer always takes centre stage. “One team, for example, developed an app which we’ve now made available to our customers, namely a claim tracker”, reports Nicole Nebelung. “Insureds can use the app to check the status of their submitted claims and see when they can expect a payment.” Using surveys and other tools, staff at the digital factory found out that this information is of great relevance for most customers.

Sometimes they even carry out such surveys in the street. “Once, colleagues simply went outside with their dummy app on a tablet and asked passers-by: What do you think of this? What else could be improved? Is there anything missing? Since all teams have colleagues from IT, suggestions and requests could be implemented in a flash.” Everyone benefits: customers receive a tailor-made service, while staff see first-hand just how useful their agile way of work is.

Trying things out and playful working

The fact that some efforts will also lead to a dead end forms part and parcel of the concept. Rapid failure is part of the plan. This is because one advantage of agile working is that individual aspects can be ditched without jeopardising the entire project. The so-called “scrum method” makes this possible.

The term “scrum” comes from rugby and refers to the tight huddle that’s formed when players gather around the ball. Applied to agile project management, this image means that a team has more success than a lone wolf, particularly when it comes to passing the ball – or the topic – back and forth.

Every day at ERGO’s smart factory accordingly starts with a “daily scrum meeting” in which participants give colleagues a brief update on the status of their project. If anything is going wrong, this is often when it will become apparent. Either that, or in one of the reviews that take place every two weeks. “These meetings mean that we have short development cycles and can respond rapidly when something doesn’t go as expected”, says Nicole Nebelung.

In the traditional world of work, she says, the processes are different. “Here, projects often have clearly defined beginnings and ends, and when the project is completed, the conclusion is sometimes that the results were not as useful as had been hoped. But by then it’s too late to try out changes.”

On the fifth day of the week, the agile colleagues – who wander between the old and new worlds of work – leave the digital factory behind to return to their usual work environment. They encounter colleagues, supervisors and more and more curious people keen to hear about their experiences in the smart factory. The digital factory ambassadors thus inspire others to get actively involved in the transformation.

Fortunately. For when it comes to digital transformation, it’s worth being right in the thick of it and not just on the sidelines. In other words: agile. That way, the necessary cultural transformation will also succeed. Nicole Nebelung has worked as Digital Transformation Manager at ERGO since the end of 2018. “There is no blueprint for this role”, she says. “The great thing about digitalisation is that you get to be the first to do many things. That’s what makes it so exciting.”