Who still remembers Google Glass? The glasses with virtual display and click button on the temple were first a hype and then a flop. In 2015, Google's parent company Alphabet discontinued sales. Was that it for the computer on the eye? Far from it! Microsoft for augmented and Oculus for virtual reality are now on the market with glasses that are much more than mere entertainment devices. Apple is also focusing heavily on mixed reality and, like Facebook/Oculus, is working on replacing cell phones with glasses at some point. This is one of the reasons why ERGO operates its own Competence Center for these technologies in Berlin. 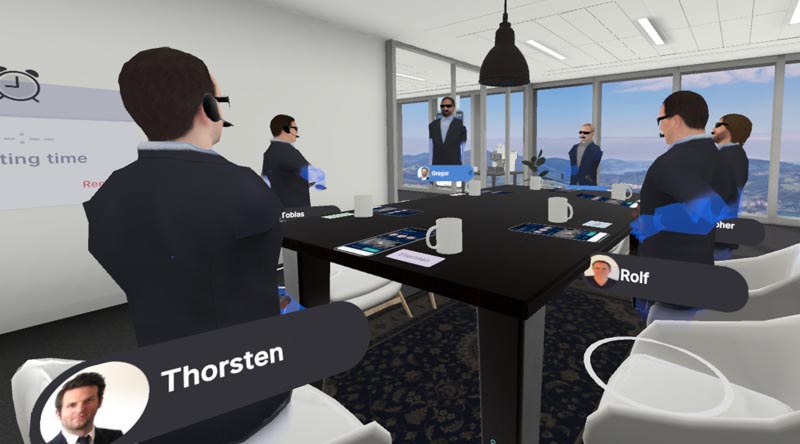 The ERGO man sits at the kitchen table in the customer's home, advising him on the right insurance cover. The conversation is good, trusting, they have known each other for some time. The next moment, the agent is in a new environment: the customer becomes a female customer, the kitchen becomes a private study - the conversation does not go well at all. The customer is unhappy, the colleague tries to moderate.

Stop! In reality, the ERGO employee is sitting at his walking desk. In front of his eyes, he wears glasses as massive as diving goggles and speaks into the empty room. The goggles are an Oculus Quest and the customer conversations are part of a VR training program. The tool was developed by the ERGO Academy and the ERGO Innovation Lab in Berlin. Normally, young ERGO employees train customer conversations together with trainers - in other words, with a real person. But customers are individual, everyone is different, and everyone reacts differently. Moreover, the training sessions often take place in training situations, with 20 other people in the room. That is not realistic!

This is exactly where the software comes in. The virtual ERGO agency assistant gets to know different customer avatars who speak with a real, human voice (not a computer voice), who live in different, domestic environments and have different topics, problems and moods. "This makes the conversation training more realistic," says Olaf Reckzeh, instructor at ERGO Academy. "Sure, the virtual 3D world looks animated with the customer as the counterpart, but after a short time you get the impression that the virtual environment is real and you are in a real conversation. It's nice to see the value that virtual reality can one day achieve, for example, when training a sales call."

The customer avatars can look sad or happy, annoyed or happy - depending on which conversation option the training employee:s choose. The VR software is coupled with the Parloa system, which also serves as a dialog building block for voice bots. In this way, the virtual customer always reacts differently to the arguments of the ERGO employee. The program thus becomes a soft-skill training that provides an evaluation at the end, a score - whether the conversations went well or not.

User tests for the case are currently underway, and the program is to be rolled out further from the summer. Victor Thoma and his colleague Paul Schön from ERGO are pleased with the response. The employees at the ERGO Innovation Lab in Berlin are responsible for the mixed reality experience at ERGO. The 3D tool for conversation training is just one prototype of many they have launched since 2020. "We don't just want to try it out in silence, but gather as much feedback as possible," says Victor. "It goes down well with the employees, it's tangible and also relatively quick to program."

The Berlin colleagues do a lot themselves, for example, they can create new trainings in the software editor, add further conversation scenarios, operate the 360-degree camera equipment and shoot corresponding films ("I do the sound, my colleague Paul the camera and the editing"). In this way, they work quickly and immediately learn the strengths and weaknesses of the approach at all possible interfaces.

The result was a one-hour training format for employees. The Berliners used four pairs of glasses to train 50 people at ERGO over two days. Put on the glasses and take on the customer's perspective, and the journey through ERGO's world of digital solutions begins. Car accident? TV set broken? Grandmother living alone has fallen in her apartment?

The 360-degree training film - shot with actors - explains how artificial intelligence brings incorrect incoming mails to the right address and how the fall sensor automatically summons help. That's part one of the training film. In the second part, the brains behind the applications have their say. Suddenly, the head of artificial intelligence is standing in front of you - filmed in 360 degrees in his office - and answers questions about the technology.

What's more, the software doesn't just let participants be passive, but involves them. For example, the virtual phone rings and the presentation only continues when participants answer it with their avatar hand or press a button. Victor promises that many other training courses will be built.

Board meetings with glasses for a year

Among other things, Paul and Victor are also responsible for the fact that the division heads of ERGO Digital Ventures currently reach for the VR glasses before every jour fixe with CDO Mark Klein. The meetings take place as 3D avatar meetings - in a kind of three-dimensional zoom or team stream. In the meeting room, managers come together as avatars with realistically animated faces.

Everyone who gets to test it out is regularly thrilled, says Victor: "Participants playfully explore the virtual meeting room and test everything out." The room has a terrace overlooking a valley on a beautiful lake. If you look to the left or right with your glasses, the avatar moves with you. Even the voice of the person sitting next to you changes as they virtually turn away from you.

Participants can fill a whiteboard together and share a laptop screen in the virtual room. Theoretically, the virtual team could also put a car in the room and look at details from any perspective, or an operating room in the hospital from all sides to get a better understanding of a particular topic. In addition to all the fascination, the technology has another advantage: under the glasses, there is full concentration on the meeting.

"But of course we also ask: Will we really do this regularly in the future? What is the added value besides all the gimmicks?" says Paul. The managers around Mark Klein have agreed to test virtual meetings for a year. "I don't know if this will add value in the long run and if virtual meetings will really get better with VR technology," Paul says. "But the fact is that we've gathered a lot of expertise in a year - and can draw our conclusions from that."

Anyone who thinks the glasses only have a nice entertainment factor is mistaken - says Victor. A new industry is just emerging here, he says, and it's on the verge of mass adoption.

The vision is of a pair of glasses that will eventually replace the smartphone - once 5G is available everywhere. And if the computing power is outsourced, the glasses won't have to look like they're on a deep-sea dive. They would be smaller and easier to handle, and still have the same range of features. The ARD sports show in a 360-degree live stream will then be normal. Via glasses, you simply take the perspective of the goalkeeper next to whom the ball goes into the net.

Virtual customer consultations at ERGO will be possible even earlier: for the super early adapters who have glasses at home and are fans of the technology themselves, with which one can look into the hospital when consulting on inpatient health insurance and thus literally feel the features of the tariff. ERGO sales partner Philipp Kompa recognized the potential of location-independent VR consultations early on and is looking forward to soon being able to communicate the topic of insurance to his customers in a completely different way. And in the long term, it should also be possible to sign the insurance contract virtually. Victor and Paul are working on this.