Blockchain, Bitcoin & Co. - how much potential is there in these technologies?

What actually is a Bitcoin? And what makes blockchain so interesting? Why is there more and more talk about cryptocurrency? Will you soon be able to pay for your coffee with Bitcoin? We asked mathematician Markus Hablizel these and many other questions. The innovation manager with a doctorate is 36 years old, an expert in cryptography/blockchain and works for Munich Re in Munich. 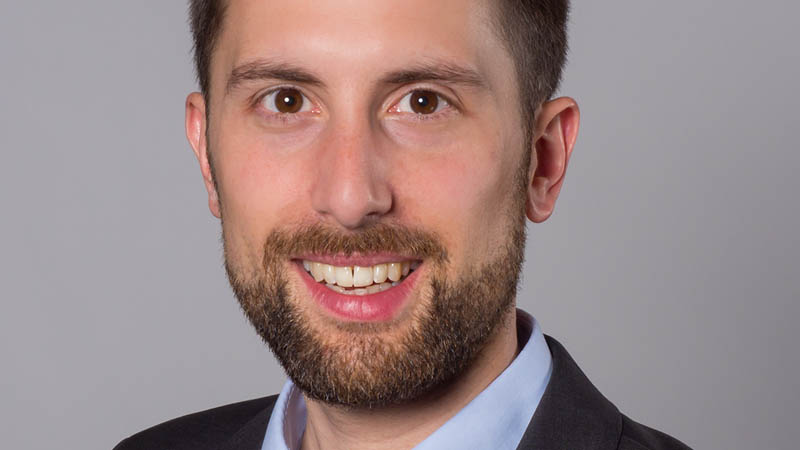 For many, mathematics is a subject that was already a nightmare at school. For Markus Hablizel, it is a passion: number theory, cryptography - these keywords make the native of Baden-Württemberg blossom: "I have always been fascinated by these topics, which is why I also did my doctorate in the field of number theory. For me, blockchain is one of the most important inventions of the current decade. The developments associated with it are extremely exciting, as it opens up a great many new possibilities."

But what is blockchain? And how is it related to cryptography?

"Cryptography is the study of encryption. This in turn is usually based on number theory. Most people are familiar with simple, so-called synchronous encryption: sender and receiver agree on which number stands for which meaning - and thus both have a 'key' to encrypt and decrypt messages," explains Hablizel. "An elementary further development of cryptography came about through the development of so-called asymmetric procedures. The special thing about this type of encryption is that the sender and receiver do not have to have the same key. This means that there does not have to be any - often insecure - transmission of the key. Instead, there is an encryption key (public key) on one side and an independent decryption key (private key) on the other side. This procedure was developed in the early 1970s and offers the possibility of publishing the encryption key without automatically offering the possibility of decryption. All encrypted data transmissions in the network used these procedures and these also form the basis for blockchain," clarifies Hablizel.

"The crucial thing about blockchain," the expert continues, "apart from the encryption, is the decentralisation. This means that there does not have to be a central office for the administration or validation of the individual transactions. Each individual transaction is stored within the blockchain infrastructure in a chain of individual blocks (blockchain), creating a kind of decentralised account book. Every change in this is therefore documented decentrally and is up-to-date at all times. So-called "double spending" - i.e. the multiple use of the same unit of a cryptocurrency - is excluded. This provides the basis for payment transactions without a central authority such as a bank, PayPal or similar."

Blockchain is the infrastructure, Bitcoin the "currency"

The technological innovation blockchain thus represents a kind of revolution that goes far beyond Bitcoin. Nevertheless, Bitcoin is by far the most popular application currently associated with Blockchain: "Bitcoin is often referred to as a digital currency, but strictly speaking this is not quite true. By definition, a currency is always a form of payment recognised by a state or institution (such as the European Union) (a "sovereign money system"). This does not apply to Bitcoin, as this payment method was established completely independently of nations and states, purely user-based. Bitcoin is a means of payment that is de facto recognised, but completely independent of the actual currencies. As a so-called crypto-currency, Bitcoin has established itself. It is currently being increasingly invested in by established companies as well. I assume that it is here to stay."

Will this make banks superfluous?

Markus Hablizel is optimistic with regard to the banking industry: "Blockchain certainly has disruptive power and will change many things. Therefore, banks have to deal with the topic. But in my view, banks as institutions will in no way become superfluous as a result. On the one hand, because there will certainly always be different types of payment transactions. On the other hand, because banks also have other tasks. However, the role of banks will change. For example, the individual decryption key, which only the recipient of cryptographic data has, must be kept somewhere safe. This is possibly a future new field of activity for banks." Moreover, the passionate "crypto fan" continues, bitcoin is currently used less as a means of payment and more as a long-term investment - similar to gold. "There used to be," Hablizel remembers, "a bar called Room77 in Berlin-Kreuzberg, where you could pay for your beer with Bitcoin - in other words, with shares of it, because a single Bitcoin was already ten to twenty thousand euros back then - that would be an expensive beer. But actually Bitcoin doesn't play a role as a means of payment at the moment."

Nevertheless, Markus Hablizel continues, it can be observed how rapidly "cryptocurrencies" are developing: "I have been involved with the topic since 2013. At that time and until around 2016, Bitcoin was more in the nerds' corner." Just in the past twelve months, however, this has changed a lot, and many institutional organisations have invested a small part of their assets in Bitcoin. This is positive, according to Hablizel, because it could mean that the strong volatility that has characterised bitcoin value in the past would thus be taken out somewhat: "I assume that these investors have a longer-term interest and don't want to pocket short-term trading profits."

For the insurance industry, the "cryptocurrency" and what is connected to it is definitely a big growth area, Hablizel professes: "It is very similar to cyber insurance, which was a tender little plant just ten years ago. Today, no larger company can do without it." And, Hablizel continues: "We are getting more and more enquiries from the B2B sector from customers who want to protect their product from the areas of blockchain, cryptocurrency etc. against their customers who invest money there." There has been particularly much discussion in recent weeks about the topic of NFTs (editor's note: "non-fungible tokens"). These tokens are unique, so they cannot be replicated or destroyed. They thus form the basis for owning virtual goods - such as virtual art. "As the market for this is growing more and more, the topic of NFT will continue to gain momentum," the enthusiastic mathematician is certain. In his opinion, this opens up another field of risk coverage for insurers.

For the number theorist with a doctorate, however, it is not the Bitcoin phenomenon that fascinates him above all. He sees much stronger innovative power in the area of blockchain. "An infrastructure that manages without a central authority offers a number of exciting possibilities. Completely new business models will emerge here that are relevant for many industries - including us as insurers." But this does not mean, Hablizel clarifies immediately afterwards, that a central intermediary is generally worse than a central solution: "On the contrary. Sometimes it is even good to have a central 'administrator' who, for example, also assumes liability if something goes wrong." Nevertheless, the blockchain approach of exchanging data in a decentralised way and being able to be sure that nothing is falsified is a very attractive approach for many different use cases.

Insurance companies in particular have a number of processes in which data needs to be exchanged. Munich Re's innovation manager cites practical examples: "If you want to change your car insurance, for example, you usually take your claims history with you to get a no-claims bonus with the new insurer. This means that data is exchanged between different insurance companies. Using blockchain, this would be possible easily, in high quality and without manual effort. The same applies in the area of fraud detection. Insurance companies have a central register to check whether a policyholder is not claiming his damage from several insurance companies at the same time. Larger claims are reported there and compared. This is also a good use case for blockchain." These topics are still dreams of the future, as the effort required to set up a corresponding infrastructure together is still considered too high. However, such solutions are being considered more and more.

How does the long-standing blockchain expert Markus Hablizel assess the future development of the technologies? In his view, can they already be called established? Or is it still too early for that? "Five years ago, I would have said that it was still uncertain how these topics would develop. In the meantime, I'm of the opinion that you can't simply get rid of Bitcoin or cryptocurrencies in general. Five to six years ago, states would still have had the chance to regulate the emergence of these digital means of payment. In the meantime, it is too late for that. Bitcoin will certainly not be used as a means of payment for everyday needs, because blockchain is only suitable for a manageable number of transactions. The high computing power that blockchain requires is also a critical issue at the moment because it requires a lot of energy. This will no longer change for Bitcoin, but other blockchain platforms are already working on alternatives. Overall, I'm sure there will be a lot more big changes, but fundamentally these technologies are definitely here to stay."

More information from Markus Hablizel on the topic of blockchain can be found here: