Reverse Carbon is a Swedish climate tech company that aims to enable the removal of carbon dioxide in developing countries. //next columnist Markus Sekulla spoke with Jenny Fellenius, co-founder of Reverse Carbon, about how the start-up removes CO2 from the airair, turns it into biochar and thus provides development aid at the same time. The interview is part of our new green tech series. 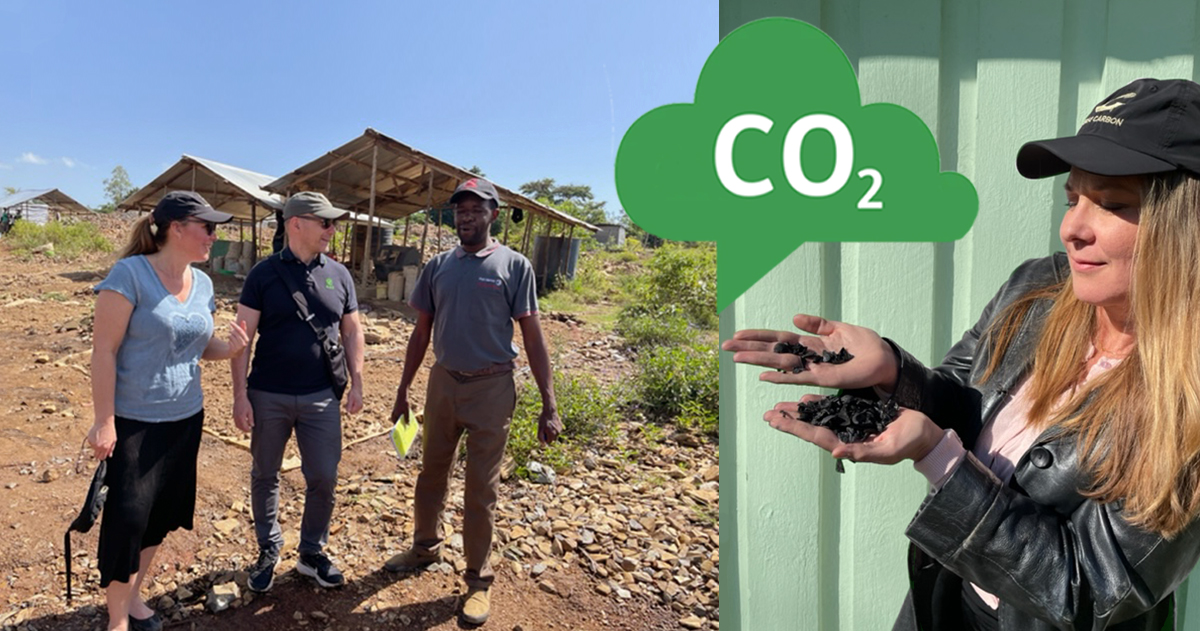 Markus: Hi Jenny, glad to have a chat with you today about your start-up Reverse Carbon. Please give us the intro: Who are you and what does Reverse Carbon do?

Jenny: Reverse Carbon – we are a Swedish climate tech company based in Stockholm and founded by Kenneth Möllersten and myself. We have a strong scientific foundation, a long-standing engagement in carbon removals and sustainability markets and climate project development in developing countries. We have a project team based in Nairobi, Kenya.

We move carbon from the air and lock it in with nature and tech. We create scalable Carbon Dioxide Removal (CDR) in developing countries based on the pyrolysis of sustainable agri-industrial biomass residues which creates biochar that is highly resistant to degradation. We permanently sequester the carbon in deep biochar repositories in closed mining lands. We contribute to multiple SDGs and as part of the overall eco-restoration process, the biochar helps rehabilitate contaminated mine sites. We call it “The Good Carbon Removal Credit”, a credit to be proud of.

Markus: In short, what specific problem do you solve with Reverse Carbon and how?

Jenny: We combine permanent carbon dioxide removal (CDR) with a contribution to sustainable development in developing countries. We address the urgent need for a scalable biochar value chain and seek a solution for large-scale and cost-effective biochar production. To be able to sustainably pull tonnes of CO2 out of the air, we permanently store the biochar in disused mining sites and ecological restoration projects.

The world is now ready for Carbon Dioxide Removal

Markus: Could you describe the moment when you knew that the idea is that great that you need to become an entrepreneur / found a company.

Jenny: Kenneth was one of the first in the world to come up with the idea of CDR for the attainment of ambitious climate targets 20 years ago but then the world was not ready for any CDR entrepreneurs …

The idea to start Reverse Carbon emerged when the world’s countries adopted the Paris Agreement in 2015. For the first time ever the world adopted a temperature target – the  very ambitious 1.5-degree target. The target requires  huge amounts of CDR  and we new the world was ready for CDR entrepreneurs! It is not often that a market is created globally all at once.

Support in early phases is important for start-ups

Markus: What is the biggest problem start-ups in the field of Sustainable Tech are facing?

Jenny: In my opionion, too much money is looking for the unique and revolutionary idea that can deliver gigatons in the future instead of focusing on all the solutions that can start delivering today at gradually increasing scale. Then more risk and patient capital are needed and also grants in early stages that give the social impact entrepreneur time and room for action based on their sustainability know-how.

It is also challenging that so many stakeholders are completely new to the CDR market. This results in a tendency among actors entering the CDR market to follow each other. We are experiencing a knowledge gap and the pathway to Net-Zero is narrow. For example, it has become almost a hype to set up a +1000 year criterion for how durable carbon dioxide removal should be able to deliver. Sure, it is good to have long-lasting durability. But it is also crucial to develop projects that can deliver on hundreds of years as they will be absolutely necessary for us to cope with the large carbon dioxide extraction in the near term.

Technology only partially solves the problem

Jenny: We must accept that technology can only solve part of the problem. Even if we work to solve climate problems with sustain tech solutions, no matter how innovative we are, we will not be able to solve the climate crisis without behavioral changes as well. Behavioral change is something that we humans have to accept. Raising awareness of behavior change is important for all societies.

One can start by consuming more wisely – pick and empower companies with net-zero pledges. Help young people create lifelong patterns and be aware of which choices have the greatest impact. (Eating a plant-based diet, avoiding air travel, living car-free and having fewer children has a large impact on an individual's carbon footprint).

Markus: Everyone talks about the great resignation and how difficult it is to find people, does a purpose driven start-up like Reverse Carbon also have this problem?

Jenny: No, not really, we experience great interest from many people who believe in working on climate change solutions and who are inspired to contribute and do something meaningful. In our case, we contribute to several SDGs in developing countries, which gives an extra sense of meaning to many.

Jenny: Start operating Reverse Carbon Hub 1 in Kenya which will remove 3,000 tons of Co2 from the air every year.

Markus: Jenny, thank you for your time!

As part of the Climate-KIC accelerator, Munich Re and ERGO are currently supporting five start-ups active in the field of carbon removal, where they are making an important contribution to combating global warming. In a series of interviews with //next columnist Markus Sekulla, we will introduce the five young companies with big ambitions in the coming weeks: NeoCarbon, Reverse Carbon, Silicate, Treeconomy and Ucaneo Biotech.

If you would like to take a look at the companies already – here is the link to their websites: