Without a driver: AI racing car from Munich sets fastest time in Indianapolis

The Indianapolis Motor Speedway hosted the Indy Autonomous Challenge on Saturday - the world's first driverless car race. Nine university teams from all over the world competed with race cars controlled by artificial intelligence (AI). The electric runabout from the Technical University of Munich (TUM) covered the course fastest with an average speed of almost 220 kilometres per hour, skilfully avoiding many an obstacle - and brought the young researchers prize money of one million US dollars. 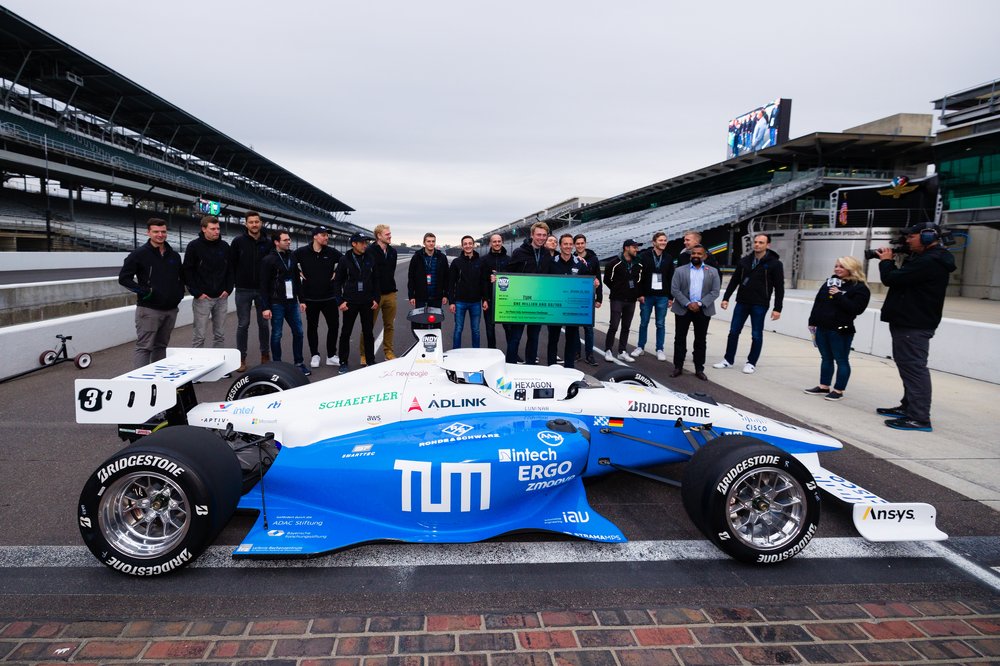 This is what winners look like: TUM students with their AI runabout and a check for the $1 million prize money. (c) Indy Autonomous Challenge

"This victory was (pre-)programmed!" was the headline in the BILD newspaper at the weekend. And it was indeed a very special race that took place on Saturday in front of thousands of live spectators and another 20,000 racing enthusiasts from all over the world. Because: The racing cars were not driven by humans, but by computers. Universities around the world had literally sent their artificial intelligence-based systems into the race. Participation in the race alone was a success, after all, only nine teams were allowed in total - and the "TUM Autonomous Motorsport" team was the only one from Germany. Second place went to "EuroRacing", a joint team from the University of Modena and Reggio Emilia, University of Pisa, ETH Zurich and the Polish Academy of Sciences.

"The demands placed on a vehicle in the Indy Autonomous Challenge are enormous," says team manager Alexander Wischnewski: "Unlike in normal road traffic, there are virtually no rules - the behaviour of other vehicles is therefore difficult to predict. At speeds of up to 300 kilometres per hour, the software has to react extremely quickly to changes."

Here, the on-board computer records and analyses all the information provided by cameras, LIDAR sensors, GPS receivers and radar sensors in a fraction of a second. And uses this data to make split-second predictions about where the other vehicles are heading in order to make decisions that are then given as driving commands to the steering or brakes.

For one and a half years, around 60 doctoral students and students from the Institute of Automotive Technology and the Chair of Automatic Control at TUM had been working on a software architecture that could solve these tasks safely and also quickly. In doing so, they were able to draw on experience from previous projects: for example, the "TUM Autonomous Motorsport" team had participated in the Roborace demonstrations at the Formula-E event in Berlin in 2018 and at the race track in Monteblanco, Spain, in 2019. Nevertheless, due to the changed conditions and rules of the current race, a completely new software became necessary.

"We put a lot of time and energy into simulating the race car and the race track," says Wischnewski in retrospect. A major challenge was to digitally reproduce the sensors such as optical cameras and lasers. The researchers and students also managed to simulate races with up to eight autonomous racing vehicles. "We were already able to detect and correct many errors through the virtual races. And so we also had the advantage that transferring the software to the real car was not a big problem for us."

Know-how is transferable to road traffic

Winning the race in Indianapolis is a great success for the team. But the researchers are interested in more, as Wischnewski emphasises: "In the race, we can test and optimise the fast reaction of an autonomous vehicle to unforeseen events at high speeds. This experience will take us a big step forward in the development of safe autonomous vehicles in road traffic."

There was also praise from TUM cooperation partner ERGO: "This victory is also a strong signal for Germany as a location for technology and innovation and shows that we are well positioned for the numerous challenges that come with a changing automotive industry," congratulated Karsten Crede, Chief Executive at ERGO Mobility Solutions, on LinkedIn. The ERGO Board member is also certain: "Autonomous driving is of fundamental importance for the future of mobility."