The Crispr/Cas9 gene scissors have earned their discoverers the Nobel Prize and raised hopes of being able to treat previously incurable diseases. The procedure, in which a molecule cuts the DNA strand at a precisely predetermined point, is actually simple and yet a marvel. This mega-innovation is thanks to advances in genome sequencing - which has long since become indispensable without digitalisation and artificial intelligence. 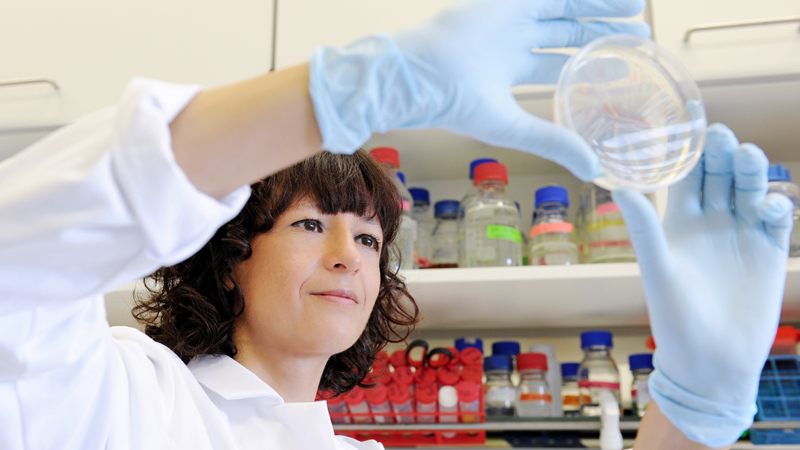 It was almost three years ago when Prof. Selim Corbacioglu from the University of Regensburg decided to take part in a study that would bring him to worldwide attention. He was looking for patients suffering from beta-thalassaemia. For those affected, the blood disease means an almost unimaginable martyrdom. Due to a genetic defect, they are practically unable to produce their own blood.

As a rule, patients are dependent on blood transfusions for the rest of their lives. Despite additional medication, severe complications inevitably arise: Bone deformities already in childhood, short stature, liver cirrhosis, diabetes and adrenal cortical insufficiency. Most patients die of heart failure well before the average life expectancy, says Corbacioglu.

DThe doctor had a severely ill woman under treatment who had all the necessary parameters for a whole new therapy method: Crispr/Cas9. Blood-forming stem cells were taken from the then 20-year-old, which were then genetically processed in a laboratory. In the Crispr procedure, the specialists reactivated an alternative gene for haemoglobin formation, which is actually only needed by foetuses and is later switched off.

The modified stem cells were finally reintroduced into the patient. The result was a complete success. Since then, the woman no longer needs transfusions. "In that sense, she is considered cured," says Corbacioglu, who had made medical history. It was the world's first patient with beta-thalassaemia who had been successfully treated with the novel gene scissors. Enormous amounts of data are produced in the genome of a human being.

Artificial intelligence and high-performance computing are increasingly important for processing these genetic codes. Like a human geneticist, artificial intelligence examines the patient's genome to find genetic mutations, for example. In this way, digitalisation now enables doctors to propose personalised treatments that are adapted to the patient's genetic characteristics.

But back to Crispr and mRNA: thanks to advances in genetics, researchers are able to build the messenger RNA profiles made famous with the Corona vaccines, which are read by cells and converted into immune responses. Immunotherapy thus harnesses the body's own immune system.

In the case of mRNA vaccines, the blueprint of the viral molecule is smuggled into the human body cells, thus preparing the immune system for the expected hostile invader. It immediately recognises the DNA sequences of the pathogen and cuts them up when they "enter" the cell. Cas proteins cut up any DNA that is assigned to them with the recognition RNA.

Even if he is rather reserved, Corbacioglu cannot entirely hide his enthusiasm for the method. "It remains to be seen what Crispr can really do, but the potential is fantastic," says the head of the Department of Paediatric Haematology, Oncology and Stem Cell Transplantation at Regensburg University Hospital. "The door to the therapy of hundreds of thousands of diseases has been thrown wide open. The list is almost inexhaustible."

The euphoria surrounding Crispr/Cas9 also reached the Nobel Prize Committee in Stockholm. Last autumn, the jury awarded the Nobel Prize in Chemistry to scientists Emmanuelle Charpentier (see photo) and Jennifer A. Doudna for their research into methods of genetic modification. The two had been instrumental in developing the gene scissors.

The method has revolutionised the molecular life sciences, brought new possibilities for plant breeding, contributed to innovative cancer therapies and could make the dream of curing inherited diseases come true, they said in their statement. Researchers could thus modify the DNA of animals, plants and microorganisms with the highest precision.

Above all, the simplicity of the method has amazed scientists. Crispr/Cas9 makes it possible to use a molecule to navigate exactly to the desired location of a cell's DNA strand and cut the defective piece there. The cell notices the cut and then reassembles the affected strand correctly all by itself. At the end of the process, there is a completely healthy cell with intact DNA.

The enzyme Cas9 plays a decisive role in this process. The two researchers had discovered during the investigation of a scarlet fever pathogen that this enzyme can fend off attacks by cutting the genetic material of the attackers and simply replacing it. Charpentier and Doudna recreated the weapon in the laboratory and thus created one of the most effective tools of genetic engineering.

Crispr - and, incidentally, the related mRNA vaccines - could only be discovered because gene sequencing is already very advanced. Researchers now have a huge pool of data at their disposal to decipher cell structures at any level of detail. When sequencing the genome of a human being, enormous amounts of data are produced.

Artificial intelligence and high-performance computing are increasingly important for processing these genetic codes. Like a human geneticist, artificial intelligence examines the patient's genome to find genetic mutations, for example. In this way, digitalisation now enables doctors to propose personalised treatments that are adapted to the patient's genetic characteristics.

But back to Crispr and mRNA: thanks to advances in genetics, researchers are able to build the messenger RNA profiles made famous with the Corona vaccines, which are read by cells and converted into immune responses. Immunotherapy thus harnesses the body's own immune system.

In the case of mRNA vaccines, the blueprint of the viral molecule is smuggled into the human body cells, thus preparing the immune system for the expected hostile invader. It immediately recognises the DNA sequences of the pathogen and cuts them up when they "enter" the cell. Cas proteins cut up any DNA that is assigned to them with the recognition RNA.

"Any college student can crisprn these days. The process is that simple," says Corbacioglu. Unlike earlier methods, the method does not require foreign genes. It leaves no traces in the genome, so to speak (in the case of the Biontech Corona vaccine, for example, it is said that the mRNA is no longer detectable after only two days). This is also seen as a great advantage by experts.

In fact, the miracle tool of genetic engineers has long been part of the everyday repertoire in the world's laboratories. In recent years, Crispr/Cas9 has been used to modify cereals and fruits such as citrus fruits, apples, melons, bananas and strawberries in the laboratory.

Tomato varieties have been made resistant to mildew, maize has been made weatherproof, cucumbers have been prepared against viruses. The possibilities seem limitless.

But of course there is also the flip side. Wherever the genetic make-up is interfered with, ethical questions and the dangers of misuse are also involved. Horror scenarios have arisen. Will Crispr pave the way for Frankenstein's human laboratory? But before a broad debate could really get rolling, the damage had already been done.

The Chinese scientist He Jiankui had removed a gene section from twins conceived in a test tube to make them resistant to HIV. The two girls were born in 2018, according to the study. The illegal medical procedure earned the researcher three years in prison and a fine of 380,000 euros.

Leading scientists had subsequently called for a worldwide moratorium on using the procedure in the human germ line. In May 2019, the German Ethics Council finally also presented a 230-page statement in which it warned of the unforeseeable ethical consequences of such interventions.

However, another point was surprising: the Ethics Council does not consider the human germ line to be inviolable.

Can't even design a worm

The physician Corbacioglu, however, suspects that Crispr could be used to change not only physical characteristics, but also psychological traits. Theoretically, it would even be possible to make people less fearful, less sensitive to pain and more aggressive.

Prof. Simone Spuler does not want to go that far. Nevertheless, she thinks it is important that the ethical debate is now conducted as broadly as possible. "Science has to get Crispr out of the corner of fear and explain the possibilities transparently," says the neurologist and Crispr expert, but at the same time warns against demonising genetic scissors as a gateway to designer humans.

"At the moment, we can't even design a worm the way we want it to be." The Crispr procedure is revolutionary, a "game changer" that offers undreamt-of possibilities, especially in therapy-relevant research. "However, we must not give patients unrealistic hopes."

Under Spuler's leadership, an international team of 20 scientists at the Berlin Charité and the Max Delbrück Center for Molecular Medicine is researching possible therapies for various forms of muscular atrophy, which until now have been considered incurable and in most cases fatal.

As with beta-thalassaemia, the suffering of patients is enormous. Many are confined to a wheelchair, and at some point their heart and respiratory muscles also lose strength. The fate as a nursing case is inevitable, says Spuler. The trigger for the so-called dystrophies is a genetic defect that transforms muscle fibres into connective tissue and fat. It is a process that has so far been impossible to stop.

Spuler can remember very well the year 2015, when a doctoral student first put a paper on Crispr on her desk. "That was like an eye-opener for me, an incredible moment," she recalls. The team then spent two and a half years experimenting with the gene scissors to find out which of the now 20 known Crispr molecules would be best to dock with and repair the damaged DNA sequence.

"Ultimately, the gene scissors work like a fishing rod that you cast. The challenge is that the hook has to hit the right spot," says Spuler. In the meantime, the researchers are already one step further. Next year, one of Spuler's patients, a young girl, will be treated for the first time with the body's own stem cells, which have been repaired with Crispr. The goal: the stem cells are to make the girl's body form muscle fibres again on its own. Spuler says: "If we succeed, it would be an incredible breakthrough."