Burnout is considered by the WHO to be an "occupational phenomenon caused by chronic stress at work". According to the study "Anatomy of Work," which we have already reported on //next, this danger has increased drastically among knowledge workers due to the pandemic-related adjustments to their working environment. The "impostor syndrome" plays a major role in this. We shed light on it - and name countermeasures. 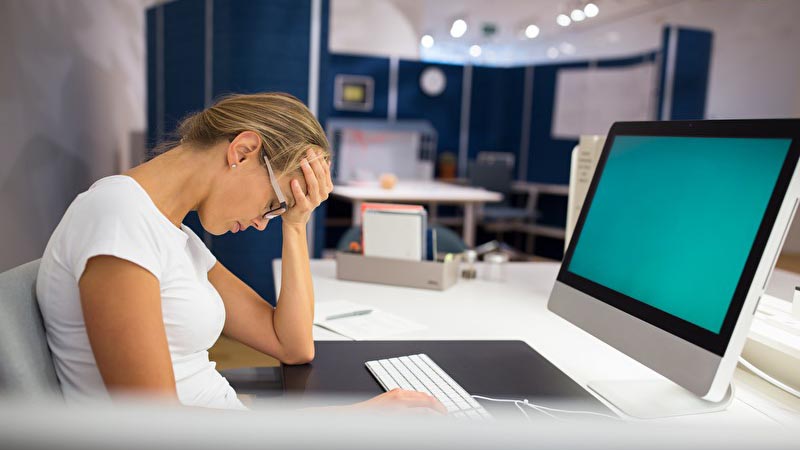 The Corona virus has changed the modern working world more abruptly than any technological innovation. However, we have already reported that - despite the acceleration of digital initiatives - we are still held back by the legacy of familiar ways of working, citing a recent study by asana. According to this, the main burdens on office workers in the second year of Corona are: "working around the clock," duplication of work, and "context switches" that reduce productivity.

For its report, the U.S. company surveyed 13,000 knowledge workers worldwide - professionals who do most of their work on a computer - about how they spend their time at work. A good 2,000 of the respondents work in Germany.

According to the study, the number of employees describing their mental health as "poor" or "very poor" rose from five percent to 18 percent last year. Forty-two percent rated their stress levels as "high" or "very high." The top reasons cited were:

"Unfortunately, the burnout numbers we have been seeing have been steadily rising since May 2020 and are likely to have a massive negative impact on businesses," the study therefore also quotes Sahar Yousef, a neuroscientist at UC Berkeley: "Our research suggests that unless organizations take a proactive approach, productivity is projected to decrease in 2021. The two main culprits are longer work days (exacerbated by a marked increase in meetings which leads to waiting until the evening and weekends to get important work done) and little separation between work and home."

Interestingly, two-thirds (65 percent) of people who feel uncomfortable without their phones also report experiencing burnout - compared to 45 percent of people who don't mind disconnecting from their devices.

Who knows the "impostor syndrome"?

According to the study, almost two-thirds of respondents are affected by the "impostor syndrome" - that is, "a feeling of doubt about one's own work performance". This is dangerous for both employees and their company: when people doubt themselves, it can also have an impact on the company's resilience. Not only does it contribute to a deterioration in mental health, but it can also mean that employees hold back, take less responsibility for tasks, or feel they contribute little to team success.

Was your onboarding during the pandemic?

"Companies should focus on the introduction of new employees so that they work with a sense of purpose, self-confidence and clarity in the coming year and are successful right from the start," therefore recommend the Asana experts.

"With fewer opportunities to connect and celebrate success, remote work is intensifying imposter syndrome," researcher Yousef also warns. "Organizations should ensure that work is still being recognized and championed in remote environments on a daily basis, and that new hires have support structures in place to instill confidence. I recommend implementing something like what our lab calls 'Daily MIT Setting' where team members asynchronously announce what their 1-3 Most Important Tasks (MITs) are for the day and reflect at the end of their day on progress made. This creates a team ritual around daily prioritization to help people stay aligned, connected, and feeling 'seen'."

Her appeal: "People need to feel a sense of progress everyday otherwise it feels as if we’re all working in a vacuum."