How fast is the urban traffic of the future?

How fast should cars be allowed to drive in our inner cities? After seven major German cities announced their intention to introduce a general speed limit of 30 km/h, this question is once again the subject of controversial debate. 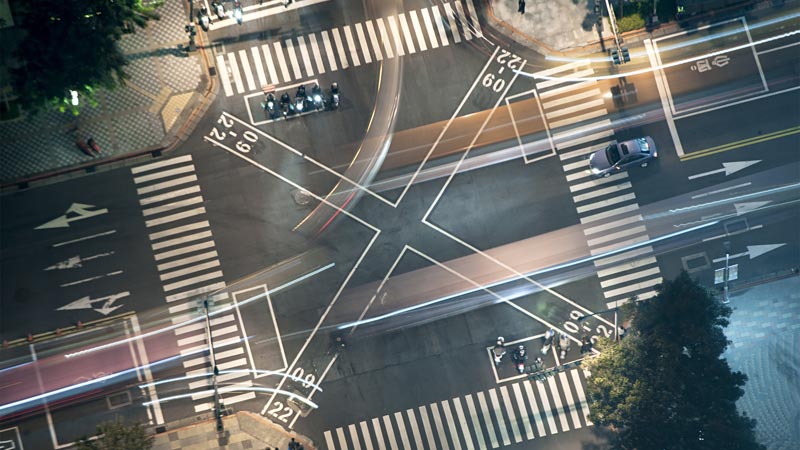 The debate mainly revolves around whether traffic at 30 km/h is safer, more environmentally friendly and more efficient than at 50 km/h. This is not a simple question to answer. However, there is no simple answer to this question. Studies on the subject provide contradictory answers to all three sub-questions. Just to give two examples: The Federal Environment Agency states that the advantages outweigh the disadvantages on all three points, while the ADAC says the opposite is the case. There seems to be no prospect of a solution to the deadlocked situation.

Both studies, however, refer to urban traffic as it is at the moment: They examined how speed limits affect traffic that consists largely of human-driven individual traffic with internal combustion engines. General traffic interests are thus weighed against self-determined driving. I ask myself: What will this look like in the future? Will the balancing question arise in the same way there? Or more concretely: Does a networked, versatile traffic still need a speed limit at all?

Traffic of the future has different signs

How the answer to this question will actually turn out can only be estimated. What is certain is that traffic will look different in the future than it does today. On the one hand, this is necessary to reduce environmental pollution and to prevent a similarly progressive clogging of inner cities despite advancing urbanisation. On the other hand, a change in traffic is inevitable - here, as in other areas of our society, digitalisation has just begun to turn everything upside down.

The first changes due to digitalisation in traffic are most noticeable in the countless transport vehicles that make their rounds through our streets. Parcel services, food delivery services and, most recently, supermarket delivery services are reversing the relationship between consumers and goods: The goods come to the customers, not the other way around. The result is a lot of small vehicles travelling short distances and competing with parked cars for the hard shoulders of our streets. But delivery services have also changed a lot in recent years: Instead of large parcel transporters, we increasingly see small, agile e-vehicles, bicycles or cargo bikes. Pilot projects with small autonomous delivery robots point to further developments that will further advance the networking of the so-called "last mile".

But traffic control is also changing. For a long time now, road conditions can be mapped in navigation systems through data collection and taken into account when calculating routes. Many sensors on vehicles help with distance keeping and braking or allow autonomous driving in special situations - for example on the motorway or when parking. At the moment, research is looking at linking these systems to form cooperative intelligent transport systems (C-ITS): How can data be exchanged between vehicles and infrastructure, thus adding value to both systems? How does the exchange between vehicles help each other or with the smartphones of pedestrians?

In summary, the traffic of the future will be more diverse, more connected and often no longer human-driven. Small delivery robots will drive next to pedestrians, bicycles next to autonomous electric cars, trucks next to self-driving buses.

How will the road users of the future get along with each other?

The current concept to reduce conflicts between the different modes of transport separates them spatially: pavement, parking, bicycle lane, road. Many cities are still struggling with the enforcement of this separation, because it requires a lot of space. Especially in narrow street structures, this causes problems. This also repeatedly raises the question of how equitable the distribution of public space is.

Traffic that includes even more traffic modes will increasingly challenge the concept of structural separation. Should autonomous vehicles have their own lane? What about so-called light electric mobility, i.e. pedelecs or e-scooters? Are small delivery robots allowed on the pedestrian walkway? These are important questions for the feasibility of new mobility concepts. For example, many people would be willing to switch from a car to a pedelec if the conditions were right. More cycle paths and better public transport connections seem to be good solutions. A redistribution of public space would therefore be necessary.

Digital networking takes a different approach to making traffic safer and more harmonious: Through data exchange, vehicles should perceive each other and cooperate with each other. Ideally, a kind of "attentive vehicle" will emerge that anticipates dangers, avoids others and merges smoothly into the traffic.

But what does all this have to do with the question I asked at the beginning about the speed of connected traffic?

Well, the current speed limit is 50 km/h in built-up areas, because a good trade-off between safety and freedom of movement was negotiated here in the late 1950s. This trade-off will be renegotiated. The human-driven car is still the most widely used means of transport, even in city centres. But the more traffic is determined by networks and the less individual motorised traffic is on the road, the more a live traffic flow controlled by intelligent systems will play a role. Whether a general, rigid speed limit can be of significance in this context is an open question - a dynamically adapting speed that optimises efficiency and environmental impact becomes conceivable.

In any case, efficiency, comfort and safety in traffic are favoured by a steady, calm traffic flow. Incidentally, this is the conclusion of both studies on 30 km/h (ADAC and Federal Environment Agency). This can be ensured by intelligent control - both studies also note this. The cooperative intelligent transport systems mentioned above are supposed to offer exactly that.

If cars, trucks and public transport share the roads with small autonomous delivery vehicles, cargo bikes and pedestrians, the intelligent control system must respond to all speeds. This does not mean that an e-omnibus has to jog behind a bicycle at 15 km/h - but the difference in vehicle speeds will not be too great. So a generally compatible maximum speed would make sense. Higher speeds could still be reserved for entrance and exit roads as well as city rings.

However, efficient, safe traffic flow and environmental impact are not the only factors that will influence the development of new mobility concepts. Not to be neglected is the acceptance of the concepts among the population. So far, intelligent solutions have been viewed with sceptical interest. Opportunities are perceived, but they are also accompanied by concerns, for example, about loss of control.

The need for lively city districts with a redistribution of public space will also have an influence on new traffic concepts. More space for participation and urban greening summarises the prerequisites for a revitalised city centre. Mobility also plays an important role in this - but it should be balanced with other needs.

The transport of the future must therefore be convincing and leave room for others. It must fit into the urban development.

In the future, a reduced traffic speed may be able to achieve what is not yet possible today: reduce the burden on residents and at the same time contribute to a better traffic flow. The prerequisite for this is intelligent traffic control that takes the entire city system into account.