Where to start? Where to stop? How to combine? These were the three questions that came to mind following my research on the issue of the “City of the Future.” But then I quickly came to the conclusion: there are no catch-all solutions and no easy answers, no end, no real setting of priorities. Many ideas are still at the testing stage, and much could be outdated again after a few years. But one thing is certain: data will play a prominent role in shaping our cities in future. 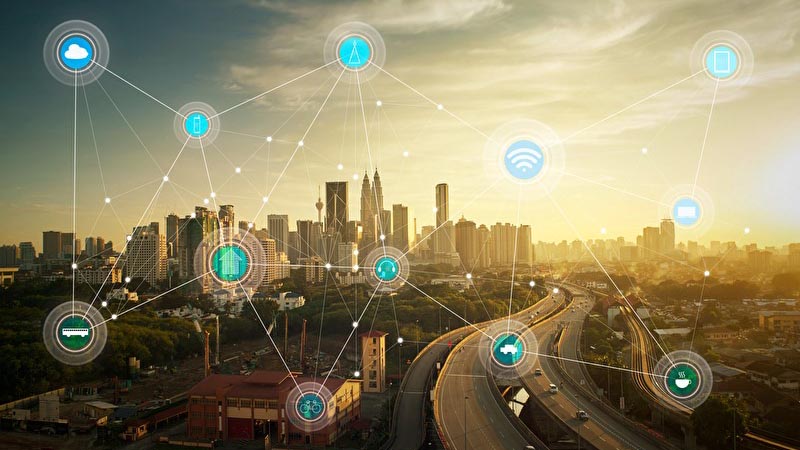 According to the United Nations, almost 70 percent of the world’s population will live in cities by 2050. This development makes it clear that we have to prepare our urban environments for this. Digitalisation can be the key to this, with a broad database providing the basis for the targeted use of new technologies in the interests of people and their cities.

The last mile in transportation and logistics

Many goods are still transported into our city centres by truck. Apart from the undesirable emissions from vehicles still predominantly fuelled by diesel, the consequences of this include increased noise levels, constricted parking on major shopping streets, and greater utilisation of inner-city roads overall. Innovative ideas are already being worked on to make this change. The Smart City Loop concept is one example of this: a kind of underground tube network that acts as a “link between long distance and micro-distribution within the city centre.” However, this is not intended to be just about the supply of goods: it also supports the disposal of returns, packaging material or empties etc. One thing is clear: a logistics service, such as this, is based on data and digitalisation. A promising feasibility study has already been undertaken for the city of Hamburg.

Another concept for the transport of goods to our cities relies on the use of electric trucks. That does not sound surprising at first – after all, electric cars are on everyone’s lips at the moment. However, the crucial factor here is that they are to be routed into the city along overhead lines specifically set up for this purpose. So no inner-city charging station structure will be needed for this, unlike for electric cars, and hence no detailed time management. Even if the concepts are currently still being designed as electric highways, it may be worth considering equipping all orbital motorways around our cities with an overhead line system, such as this.

A third perspective for the ‘last mile’ of goods transport is based on a tried and tested concept: the use of the existing tram network. A system that has been used in Zurich for the disposal of bulk waste since the start of this century was established in Berlin for logistics purposes. However, it also requires a permanently reliable database for the installation and operation of this concept to cope with the current and constantly changing needs of the city.

Developments in traffic control are one step closer to being implemented, thanks to data collection and analysis. For example, a parking guidance system based on real-time data was set up last year in the densely populated district of Nippes in Cologne, where parking spaces are hard to find in the evening and at weekends. The system monitors around 800 parking spaces close to the largest shopping street in the neighbourhood. Using LED displays on street lights, the “ParkPilot” system quickly directs drivers to the nearest free parking space. This eliminates the need for aimless driving around in search of a parking space, saving time, protecting the environment – and avoiding shredded nerves.

However, what works on a small scale in the previous example, can also be implemented to control traffic flows in our towns and cities overall. For example, Wiesbaden City Council has decided to implement a digitally intelligent system, such as this. The first stage is to convert all traffic lights and fit them with different detectors. These detectors anonymise data on traffic volume and road users. Information about events, public transport and parking spaces is also collected in a similar way. Simulations are then used to calculate how the traffic situation could be improved, possibly by changing traffic light sequences in real time.

Intelligent solutions for greater safety in public and private spaces

Smart traffic flows also have a further benefit that is not to be underestimated: they also help to better protect road users in towns and cities. So-called cooperative vehicle technologies (self-driving vehicles) are designed to reduce the consequences of human driving errors and dangerous behaviour. Safety in traffic is also enhanced if the public transport system in the city is controlled by intelligently collected and evaluated data so that the use of a private vehicle becomes obsolete. Fewer cars mean fewer accidents – especially for the mainly “more vulnerable” road users, like cyclists and pedestrians.

Smart applications could also provide better protection for both public and private spaces in future. This is what is known as ‘predictive policing’: data is used to prevent crimes. Many applications in this country are controversial – and certainly not without good reason. The use of software has already proved itself in Northrhine-Westphalia, which uses data analysis to estimate where there is a high probability of break-ins to buildings or vehicles in the near future. This means that the authorities can then organise increased security measures. The system will prove its worth at the latest after the pandemic when the current record-low numbers of break-ins are expected to rise again.

Since the pandemic, besides “traffic” and “criminality”, we have become aware of a further safety-relevant area in which intelligent technologies are being used successfully: public health. For instance, a Canadian company explained that it had been possible for it to use AI to identify the risk posed by the coronavirus earlier than the official US authorities. Intelligent technologies therefore make total sense to better assess the potential spread of a pandemic in future.

An end to excessive light and polluted air

What protects us in urban road traffic after dark, or might even seem plain beautiful to some, equates to a small catastrophe in many cities from an environmental point of view. We are talking about light pollution caused by path and road lighting, advertising, bus stop lighting or car headlights. Both humans, but especially the animals and insects living in the city, suffer from the fact that it never really gets dark in our cities. Intelligent and sustainable handling of artificially created brightness is possible through data-driven control. Smart lighting helps to ensure that artificial light sources illuminate at a sufficient but not unnecessary level, at the right time and at the right place. In conjunction with the local energy provider RheinEnergie and the company Signify, the city of Cologne is now so advanced that individual street lamps, streets, districts or even the entire lighting infrastructure can be dimmed and flexibly controlled. First and foremost, this saves the local authority money, but at the same time it helps to protect the environment and the fauna living in it.

However, the city of the future will naturally not become a better place in which to live from a good lighting concept alone. The air quality also needs to improve. There is no question that urban mobility with fewer CO2 emissions will make a positive impact on this. But here too, cities will be able to proactively improve their air quality in future by collecting and analysing data. This is precisely what the CityTree Project, among others, is committed to: creating a kind of bio-air filter for the city. The concept is based on a tree-like wooden structure with smart IoT technology, in which mosses grow. The expanses of moss produce oxygen and reduce the ambient temperature, but can also filter fine dust from the air. Integrated sensors control the supply of moss, measure the effectiveness of the CityTrees and transmit environmental data in real time.

The previous dry summers have already shown in some places how precarious the water supply in cities can become due to the increasing climate crisis in our country. It will become all the more important to identify possible damage to pipelines or bottlenecks in the urban water supply at an early stage by data analysis to be able to respond appropriately. Singapore or even Valencia are already regarded as flagship cities in smart water management today.

What applies to the water sector will also become critical for the energy supply in cities. Intelligent power grids – so-called Smart Grids – are to be used in future to analyse the required energy demand in real time by data management. Power generation, storage and consumption can then be ideally coordinated via a decentralised platform. A prerequisite for this is the nationwide introduction of smart meters.

Planning management and maintenance ahead

If major mail order companies and delivery services know when it is time for us to place our next order of cat food or drinks, why could a city not proactively alert people to when a new passport needs to be applied for or asphalt in a road replaced? The more information – that is data – is collected and analysed, the easier these predictions can be made and actions derived from them.

The same applies to maintenance, i.e. the maintenance of public buildings and facilities. A good database can provide accurate information about when and where the City Council needs to carry out repairs to buildings and modifications to the existing infrastructure in good time. This kind of predictive governance is by no means just “nice to have”. It should also be important for the future economic success of cities.

Many technological developments will help to make our cities better places in which to live. However, it will be the collection, analysis, interpretation and intelligent use of data, as discussed above, that will provide the basis for this. But this is precisely where the challenge lies: data is sensitive. Apart from a willingness on the part of city residents to reveal this data, it also requires specific legal provisions and a secure infrastructure to protect the data. A nationwide, publicly accessible Wi-Fi network is also becoming a prerequisite for Smart Cities. Just like an invulnerable power supply.

However, data is not meant to become the new oil (over which, as we know, only very few people have sovereignty). But it is certainly destined to become a kind of lubricant for the City of the Future. In my opinion, every city needs a clever mind to look at the issue from a meta-level, break it down into individual parts, and then create packages of work.

I recommend anyone interested in quickly viewing the vision of a smart city of the future based on data to watch this video of the Toyota Woven City. What can only be admired up to now in an atmospheric 3D animation is currently being built as a prototype at the foot of Mount Fuji near Tokyo by no less than the award-winning Danish team of architects led by Bjarke Ingels.