Since the discovery of quantum physics, every development of particular significance has been called a "quantum leap". In computer technology, the invention of the quantum computer literally represents such a leap. But what makes it so special? What is the significance of this technological novelty? In order to clarify these and other questions, //next spoke with Dr. Roman Horsky, mathematician at the Fraunhofer Institute for Industrial Mathematics ITWM in Kaiserslautern. 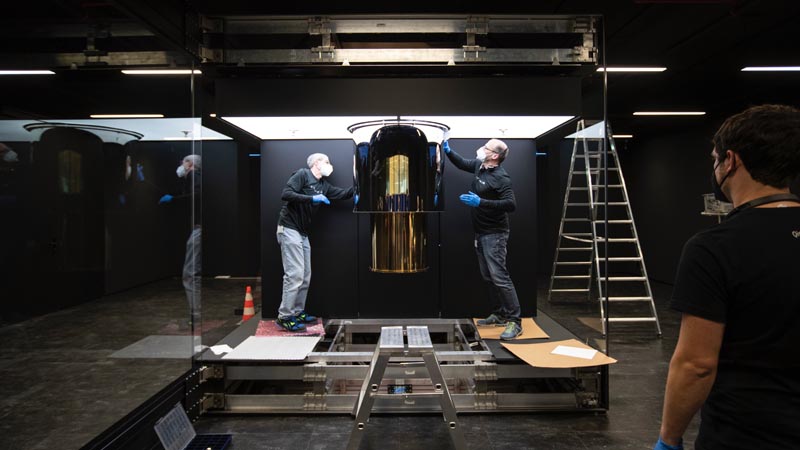 For Roman Horsky, quantum computing is a key technology that will be important for many research questions in the coming years. He himself has been working on it since 2019. From his point of view, the topic has clearly picked up speed since 2020: "You can notice that movement is coming into the previously rather theoretical concept of quantum computing. For us at Fraunhofer, the technology is of great strategic importance. In June, the first IBM quantum computer on German soil was inaugurated; it is operated by Fraunhofer under local data protection law. This enables us to implement a number of research projects from different disciplines."

If you want to describe how a quantum computer works, you quickly get into the complicated terminology of higher physics: there is talk of two-dimensional complex spaces, superposition states and interference.

Roman Horsky tries to give a simple explanation: "Quantum computers - like classical computers - are first of all machines that perform calculations. Unlike classical computers, however, the minimum memory units are so small that the laws of quantum mechanics apply to them. This results in fundamental differences. The basic unit of a classical computer, the bit, can assume exactly two states: It is charged or not charged. With the qubit, the basic unit of a quantum computer, the situation is less intuitive. Here, too, there is the possibility of a reduction to two basic states, but qubits as a memory unit represent a superposition of the basic states and are entangled with each other. This makes parallel calculations possible. The classical computer, on the other hand, has to carry out its calculations one after the other."

The number and interconnection of the qubits is decisive for the performance of a quantum computer, explains the financial mathematician. With the number of qubits, its computing power increases exponentially. But this in turn is currently also the challenge: the more qubits there are in a quantum computer, the more unstable the system becomes, says Horsky. And he continues: "Currently, about 50 to 70 qubits are realised in a universal quantum computer. This does not yet result in computing power that far exceeds that of classical computers. If the number of qubits is increased further, the system will quickly become unstable at its current state. Achieving durability in computing results and processes is the greatest challenge in quantum computing. The entire technology is extraordinarily sensitive to all kinds of external influences. That's what makes it so difficult to implement in practice."

The "computing machine", which was built in Ehningen, Baden-Württemberg, is a joint project of many participants. "Together with IBM, we provide a technology in the Fraunhofer network that can also be used beyond our institutes by industry, research and politics," Horsky explains the principle. In a ticket model, external interested parties can "book in" on the quantum computer in Ehningen - currently for a low five-figure monthly fee.

It is not yet possible for a quantum computer to run in routine operation, Dr Roman Horsky continues. "You have to think of it more like a laboratory unit. The whole thing has a strongly experimental character, and many things don't work smoothly yet." He also says that the capacities of these computers are still too limited to be able to map complex models. "Nevertheless, a number of very exciting research questions can be mapped, and we are just starting with various promising research projects from both the energy and the finance sector," says the Fraunhofer ITWM employee happily.

Roman Horsky is particularly interested in questions from the financial and insurance environment. For ten years now, the graduate physicist, who completed his doctorate in financial mathematics, has been working in applications research at Fraunhofer ITWM. Together with a total of about 500 colleagues - a large part of them mathematicians, but also scientists from many other disciplines - he works on projects in the field of techno and business mathematics. "Even if it sounds theoretical, our work always has an application focus. We often work with partners in business and industry." He himself is based in the department of financial and actuarial mathematics and, among other things, looks after the possible fields of application of the quantum computer in this area. With "our own" quantum computer on German soil, it is possible to explore the potential of the technology in more detail and compare it with classical methods. "The exciting thing is that I can combine my skills from the fields of physics and financial mathematics in quantum computer technology. That fascinates me a lot," Horsky explains. The quantum computer requires a different approach to mathematical problems, he says. "The machine has specific characteristics and properties that entail a different form of ideal use. Accordingly, one needs other formulations of problems," Horsky explains.

Many questions from the energy sector, but also finance and insurance topics

In fact, the machine, i.e. the underlying technology, defines the type of question. Horsky's department at the Fraunhofer ITWM is currently working on three specific research projects: For the energy sector, it is about optimising the use of power plants; in the financial sector, it is about simulating capital market models; and in the insurance sector, the quantum computer is supposed to help optimise the management of fixed assets by including stochastic factors.

These and similar research projects will show how efficiently and stably the quantum computer works in application questions and what long-term perspectives can be derived for the technology.

No production model in the near future

But no matter how successful the use of the quantum computer in the Fraunhofer network will be: These machines are still a long way from being a series model. Horsky states: "It is currently quite inconceivable that at some point every household will have a quantum computer. This kind of technology will always remain very specific. Maybe one day, like in the heyday of mainframes, it will be the case that large industrial companies will afford quantum-based computing systems." At this point in time, however, this too is still purely a vision of the future. The high vulnerability of qubits requires extreme shielding of the systems. Only when this succeeds and scalability is given, one can think about an everyday use, says Dr. Horsky. The website of the Fraunhofer Gesellschaft says: "There are still considerable hurdles to the operation of a quantum computer. The highest premise is to shield the fragile quanta against all environmental influences. They need a temperature lower than in space, must be cooled down to almost absolute zero of about minus 273 degrees, only work under vacuum conditions, must be electromagnetically shielded - only then is there a chance of useful calculations. Errors can occur due to external influences such as vibrations as well as during the manipulation and reading of qubits with the help of electromagnetic waves."

Roman Horsky goes into more detail: "There are different technological approaches to quantum computing. Depending on the system, the stability increases, but at the expense of the range of applications." A distinction is made, he says, between gate-based quantum computers and so-called quantum annealers. In the latter, the qubits are arranged in a predetermined structure, which makes the system more stable. However, this structure only allows specific problems and calculations. It cannot be used freely.

Technology grows out of its infancy

For Dr. Roman Horsky, quantum computing is a future topic that is gradually growing out of its infancy: "There is a spirit of optimism," says the scientist, even though it is still a highly complex topic. The quantum computer is not simply a working tool, the handling of this technology is rather an interdisciplinary topic: "You need know-how in mathematics, physics and engineering."

Roman Horsky, at any rate, is looking forward to working with the complicated and sensitive machine in the future. "And I'm looking forward to seeing the computer up close in Ehningen soon. So far, I too only know quantum computers from illustrations in books."