"Welcome to the Corona Hotline of the state capital Düsseldorf!" If you dial +49-211-8996090, a friendly robot voice has been helping you since March. How this digital assistant of the city manages to channel several thousand calls a day - and what further information it should provide - was taught to her by experts from ERGO. 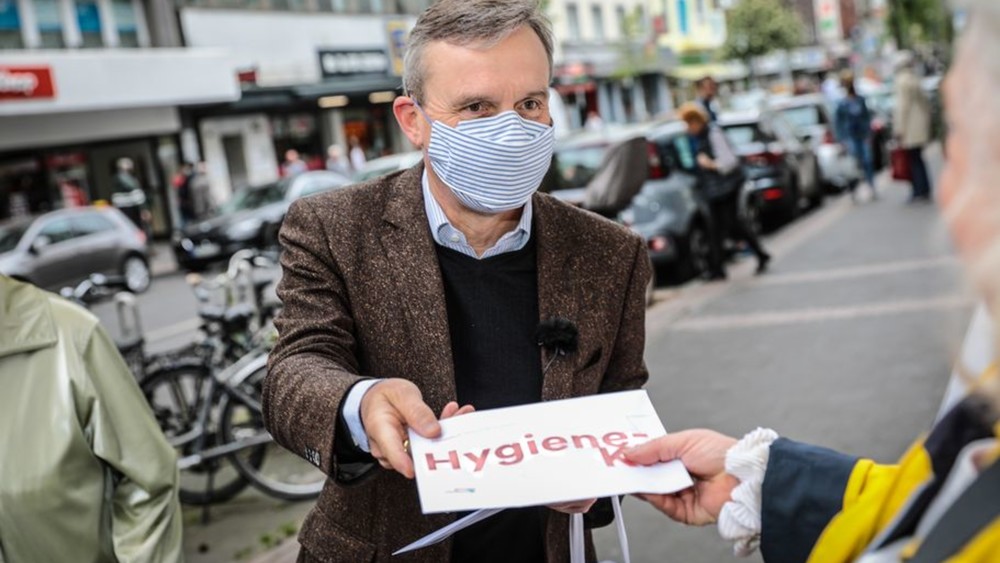 Picture above: Thomas Geisel and his staff fought against the spread of the pandemic not only with free masks for citizens (as here in spring 2020 during a campaign on Nordstrasse) - but also with their Corona hotline on 0211-8996090, which ERGO colleagues optimized at the end of March 2020.
© Photo: State capital Düsseldorf/Melanie Zanin

Just under nine months ago, the administration of the city of Düsseldorf once again turned to its digital partner ERGO - this time asking for help in improving its hotline service in the fight against the corona virus. "Once again" because colleagues from ERGO Digital Ventures and ERGO Digital IT had already launched a children's gaming website for the Kunstpalast museum in the fall of 2019.

Before the new bot cooperation for the Corona hotline, the newly founded hotline team of the city administration had already been doing extremely well for weeks - but despite the deployment of up to 100 employees, the sheer number of calls had repeatedly pushed it to its capacity limits. The hotline's main objective was actually to schedule appointments for SARS-CoV-2 tests - but in addition, there were always a large number of inquiries, which the colleagues had to refer to other city offices such as the public order office to answer over the phone. That tied up capacities.

Düsseldorf's Mayor at the time, Thomas Geisel, was enthusiastic about the cooperation: "The rapid technical implementation of the improved Corona Hotline with the help of ERGO experts shows once again how well Düsseldorf's economy and city administration are networked. The improvement and automation of the hotline was also perfectly implemented thanks to the "fantastic commitment" of the employees of ERGO Digital Ventures and ERGO Digital IT, the politician continued: "The 'reach level' of the corona hotline is regularly 100 percent. This means that every caller is actually served in their request for information. There is no better way!